A Letter From My Mother To Australia

You have all been hearing about my daughter Brittany MacLeod (BMAC to her friends) from her co-workers, mentors, professors, Dean of the Marist School of Management and one of our State Representatives but as her mother I wanted to give you a different perspective of my impressive daughter.  I know right about now you are all thinking every mother thinks their child is impressive but I want to give you specifics where she has shined and caught the attention of the world around her.

Brittany and Malcolm playing in the leaves when Brittany was little. My daughter has always had something say since she learned how to talk!

My husband, Malcolm and I knew Brittany was special when she walked at 8 months old and was conversational at 18 months old but one of the things that has continued to set Brittany apart from others is her singing.  When Brittany was little, I would take her out with me shopping and Brittany would entertain herself in her stroller by singing to herself.  People would stop me and ask me if I realized how beautifully she sang and at such a young age.  After a while instead of just thinking it was a “mother’s pride” that thought she was special, I brought her to a vocal coach to see if there was something different about her.  I came to find out she had perfect pitch at age five.

At ten years old we were visiting a historic home in Newport, Rhode Island where they were hosting a Renaissance Faire and they finished a planned event early and asked if anyone had any special talent.  Brittany said she could sing and they thought they were humoring a child when they invited her to go ahead and entertain everyone.  She was so much better than they ever expected that a couple of hundred people were blown away by her unexpectedly professional voice.  People even came up to Malcolm and I afterwards asking permission to take their photograph with our daughter. Pretty impressive!

Brittany continued to sing and set herself apart by becoming the “go to” person in our town to sing our National Anthem at sporting events. One event in particular to be mentioned was the re-dedication of our local Ice Rink, to honor the memory a fallen Medal of Valor recipient and veteran from our town.  That was in addition to performing in all kinds of music performances and venues.   Brittany still performs while at college gaining attention with her beautiful voice still performing our National Anthem and performing in showcases of talented students. 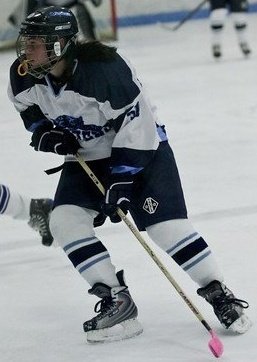 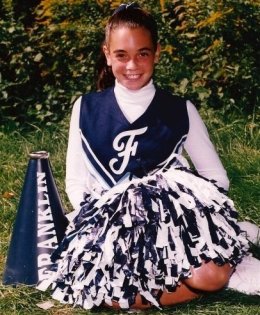 wanted to play Ice Hockey.  Well, you’re now asking yourself why is this impressive? Well, you see, Brittany had never watched an Ice Hockey game before.  Sure, in principal she knew what it was, what New Englander didn’t, but she had never been interested before. So she set out to play Ice Hockey and had to learn the game very quickly to be able to make the team and compete.  Brittany not only made the team, she played Ice Hockey all 4 years of High School. To mine and Malcolm’s amazement, our daughter who is bright, sings and was a cheerleader for 4 years had another talent to add to her list, Ice Hockey player!

But Brittany didn’t stop there.  Brittany became the voice of the student body for her High School by representing the student’s point of view at our School Committee meetings for two years as you learned from State Representative Jeffrey Roy.  This was the beginning of Brittany’s foray into public speaking and this is important when you consider when Brittany went to college she joined an international organization called Toastmasters International, an organization with over 280,000 members.  Brittany is on target to earn her Distinguished Toast Master (DTM) in three years. Once she gets her award, she will also become the youngest DTM ever in the world. It normally takes a Toastmasters anywhere between 5-8 years to earn this honor but when Brittany sets her mind to something there is usually no stopping her.

So now that I have told you all that, I can tell you that the reason I picked these unconnected factoids about Brittany is to tell you that she often surprises us but never disappoints.  She is energetic, talented, driven, intelligent, thinks on her feet, and you would be lucky to have her representing Tourism Australia because she will give you 100% of her effort 100% of the time in communicating to the world how awesome Australia is and that everyone will want to “go down under”.  That is the type of young woman she is.

I am so very proud of my daughter and all that she has accomplished!  She can, and always has captured the attention of all the people who encounter her and Australia will never forget her, I promise you that!

Posted in Letters of Recommendation